In her solo exhibition, Mutating Mary, the artist creates an absurd scenario that combines the historical figure of Mary Mallon (1869–1938), alias “Typhus Mary,” reproductive ideologies and the idea of “viral” infection in an immersive installation. The exhibition is the continuation of a performance entitled Wary Mary, which was performed in August 2019 at the Tieranatomisches Theater in Berlin. For Künstlerhaus Bremen, Maimon translates this “choreography of infection” into an installation comprising sculptures, costumes, drawings, text and sound. Infectious body parts penetrate the gallery, while drawings, costumes, texts and sounds bear witness to the development of past events.

Maimon questions reproductive ideologies and motifs of female care by exaggerating physical and mental states, tearing them out of their social context. The artist focuses on various aspects that determine the social perception of female bodies: pregnancy, birth, female care and care work. Maimon explores pregnancy as a metaphor and how our society deals with the issue of motherhood, the pressure to reproduce and images of the female body. As part of her artistic research and personal examination of the subject of motherhood, the artist consulted Orna Donath’s sociological study, Regretting Motherhood (2016), Sheila Heti’s novel Motherhood and Rachel Cusk’s biographical account of her first year as a mother, A Life’s Work. The publications bring taboo sides of motherhood to the table.

Another point of reference for Maimon’s installation is the story of Mary Mallon, or “Typhoid Mary,” who became known in the tabloid press as “the most harmless and yet most dangerous woman in America” around 1900 because she infected her fellow human beings as an unaffected carrier of typhoid. Mallon emigrated from Ireland to the USA in 1883. As a cook, she unwittingly infected those she cared for and was finally sent to an isolation ward by the health authorities until the end of her life. It was the first known case of asymptomatic typhus in the USA and had a far-reaching impact on scientific research into the spread and diagnosis of disease. For Maimon, Mallon’s story serves as a prelude to a speculative exploration of various dimensions of infection and attributions of the female body. Mallon is one of many Marys in Maimon’s new work who threatens public order through disobedience.

In her exhibition at Künstlerhaus Bremen, Maimon abducts the visitors into a cave in which the setting is both depiction and projection. Rough drawings, displayed like primitive cave-paintings, capture, ruminate on, and archive the movements the protagonists exercised and embodied in the performance.

It is not only the cave that pushes into the room and takes it over, there are larger and smaller Grown Gums, chewing gum sculptures, that are spread over the place and imposing themselves on it. While the cave provides protection and safety, the chewing gums arouse disgust and fear of infection. At the same time, they symbolize a process of eternal chewing without ever finding full satisfaction.

The long sculpture Tongue Twister, in the middle of the room, remains ambiguous: Is it the nourishing, the infectious, the restless or tempting tongue that is stretched out of the cave and seems to draw us in?

Again and again the room is filled with music that conveys different moods and sets the pace of the movements of the bodies.

At the beginning (and end) of the exhibition is the Sac for Birthing Something Other, a sculpture reminiscent of an amniotic sac. Together with Eulogy for You Dangerous Woman, a text work on textile and ode to Mary Mallon, It’s Not Mine and the image panel with the number 0, it forms the prologue of the exhibition.

Spread over the floor lay flyers, riso prints with a historical illustration of the “most dangerous woman in America:” Spread The Word. She beats skulls instead of eggs in the frying pan.

Like the number of months in a pregnancy, Maimon has produced nine cave drawings with charcoal on paper mache panels (0–9). Each of the panels represents a scene from the performance Wary Mary, but also a phase in the inner discussion of motherhood. The Prologue (0) is the prelude, an awakening and realization. The four figures represented in the cave drawings form the protagonist Wary Mary, a woman with many faces. Three of the figures have pregnant bellies and embody the inner feelings, fears and desires that circle around her. Mary’s thoughts, memories and dreams represented on the nine panels are linked to the stories of other Marys. In the exhibition space, the Inner Marys can also be seen as sculptures in the cave, where they have settled and will be brought to life in a performance at the end of the exhibition.

The panels trace a path of suffering – similar to the Stations of the Cross:

It leads from the idea of total harmony and unity of body and mind in Harmonic Fantasy (1) to the awakening resistance and discomfort with one’s own body in Resisting Itch (2) to the attempt at rationalization by consulting theory, science and one’s own mother in Research: We Know (3). It further continues with rebellion disobedience and frustration in Truly Unacceptable Ladies (4) as well as with the fear of regretting what one has let oneself in to, in Fear of Regret (5-6) and the ruminating on the same questions with the ticking of the biological clock in the background.

As social pressure seems to increase, the exhaustion that results from the constant circling around the same questions turns into collapse: salvation. On Panel 7 Ragging It (Ibuprofen Scene) (7) Mary collapses. She gives way to her body, lulls her fears and comes to rest. Relieved about her decision, she found her place in Realization Relief (8), while many eyes are watching her (still). At the end (and at the beginning) is the birth of the other: Birthing Something Other (9): the happy ending – the freedom to shape oneself and to decide about one’s own body.

In the expansive installation, Mutating Mary, Maimon creates an emotional landscape and space for critical examination in which humor – like in Greek drama – is applied as a means for catharsis.

Text by/ Curated by Nadja Quante 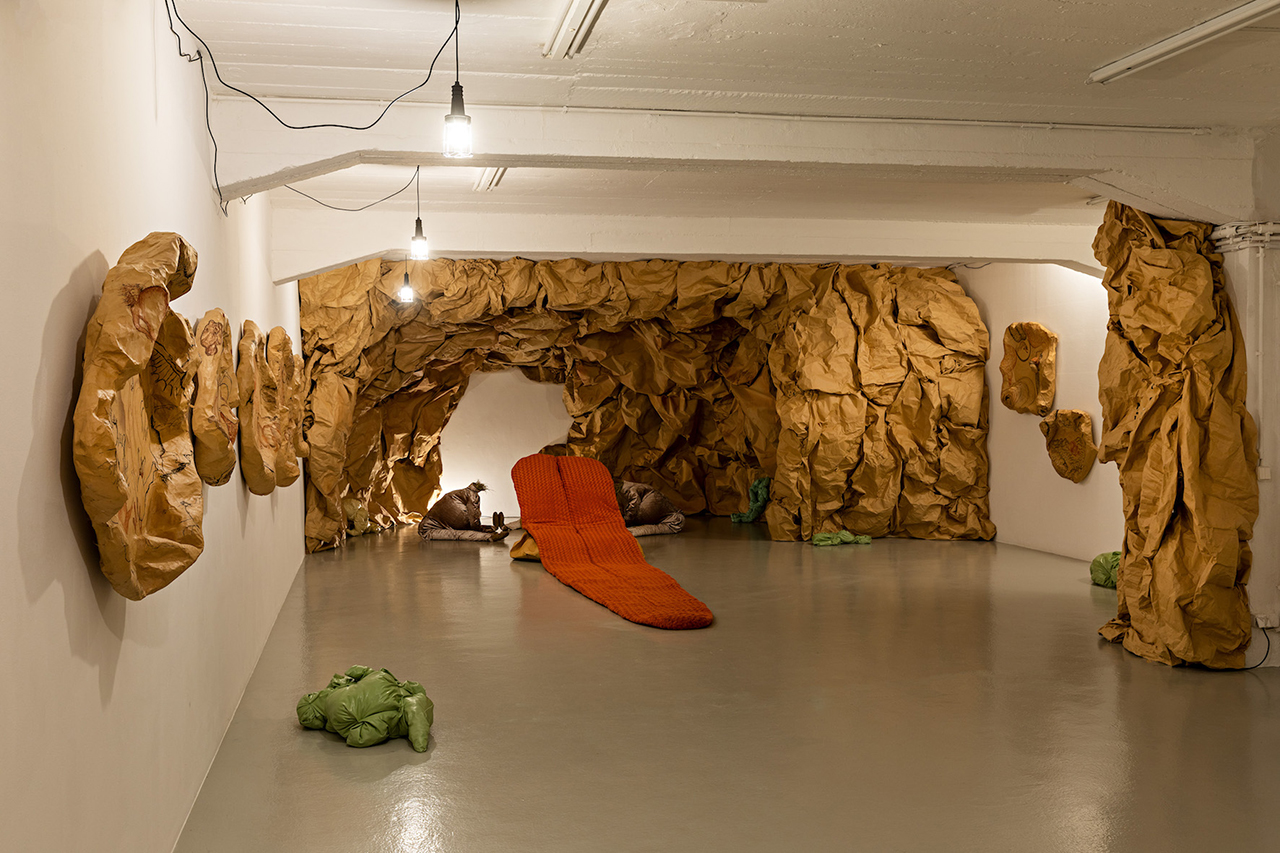 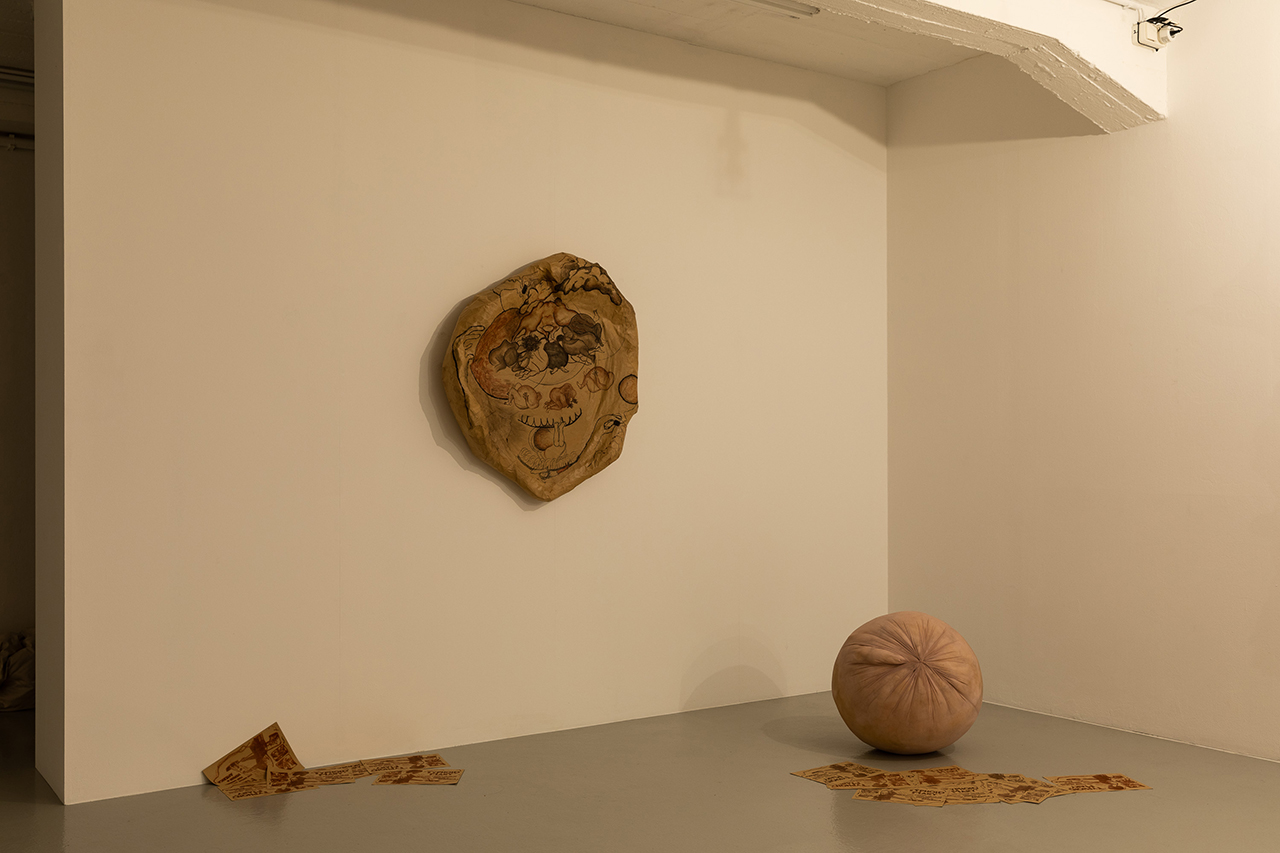 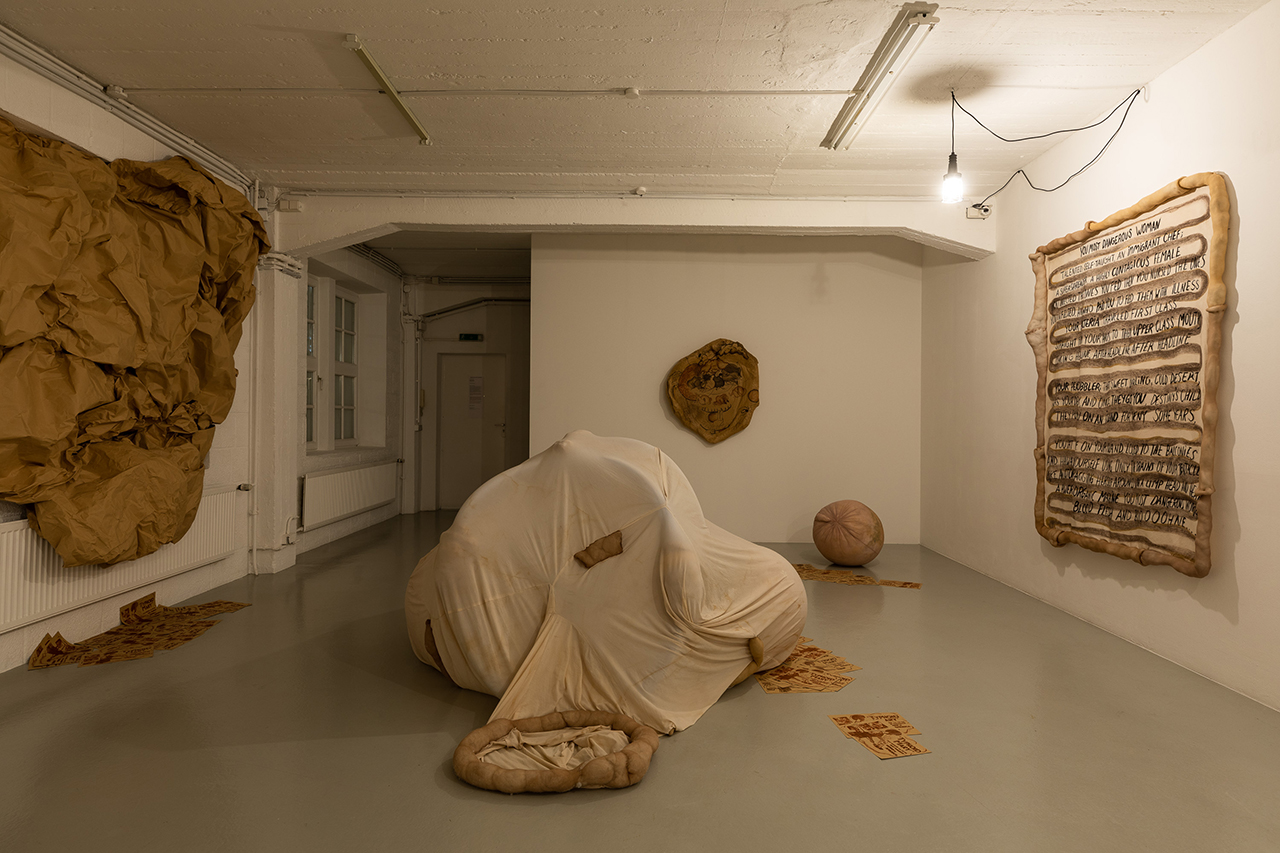 Mutating Mary, (Sac for Birthing Something Other) Künstlerhaus Bremen, Photo by Fred Dott 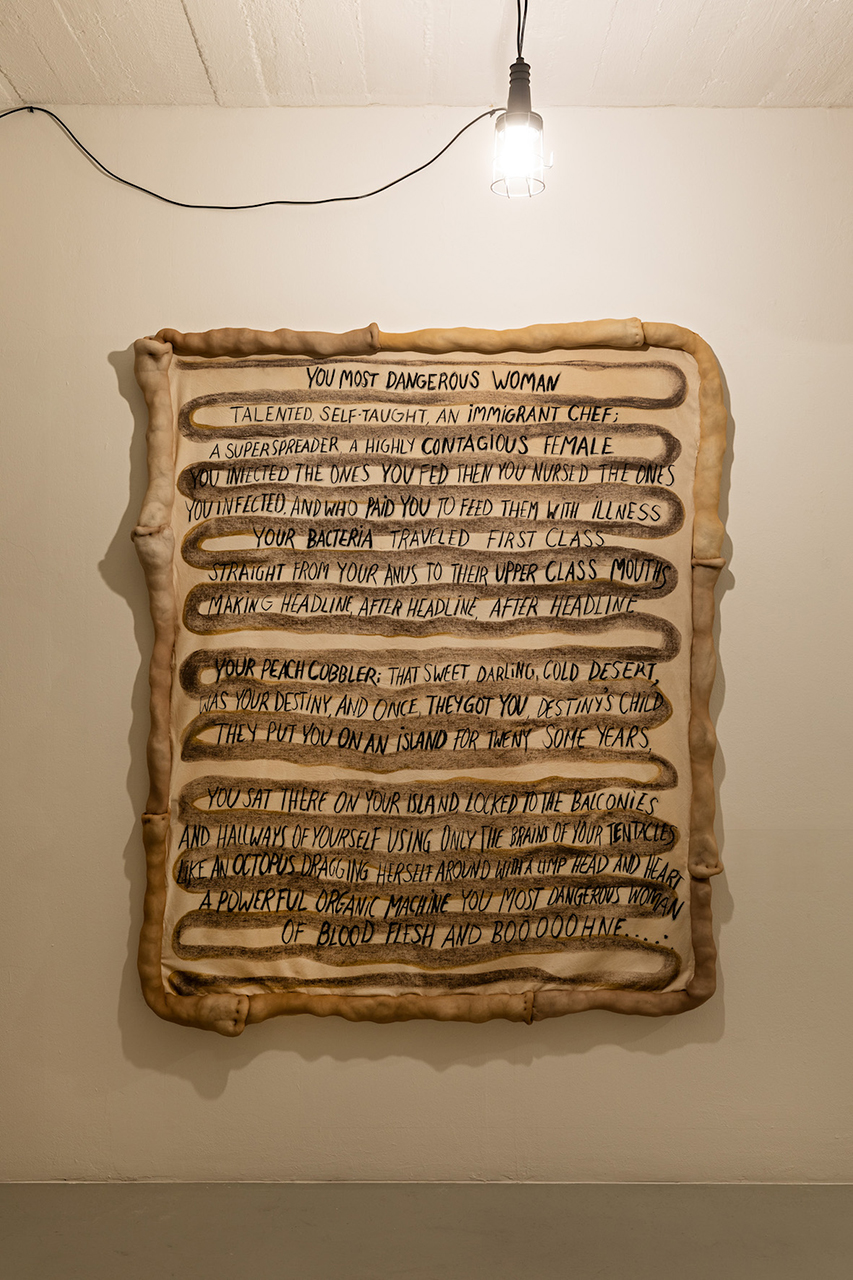 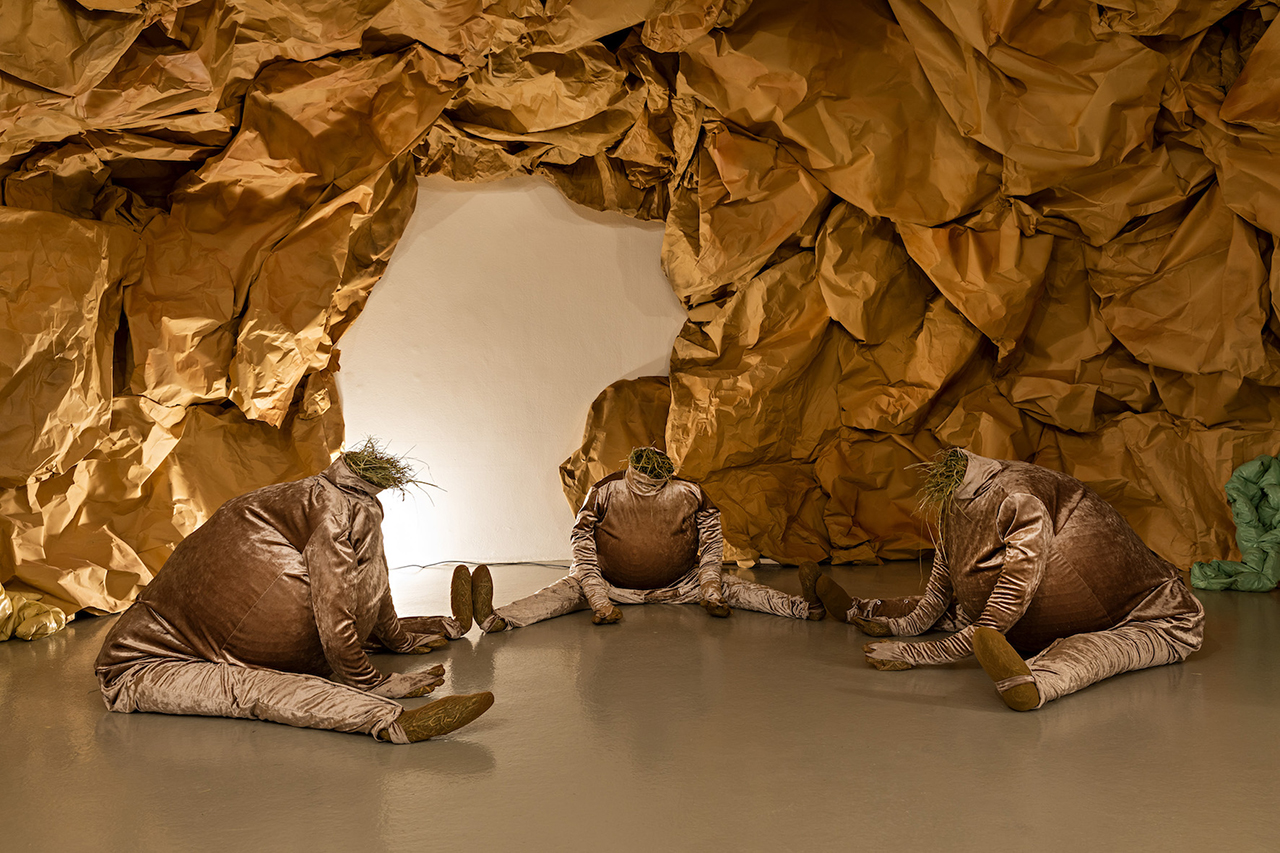 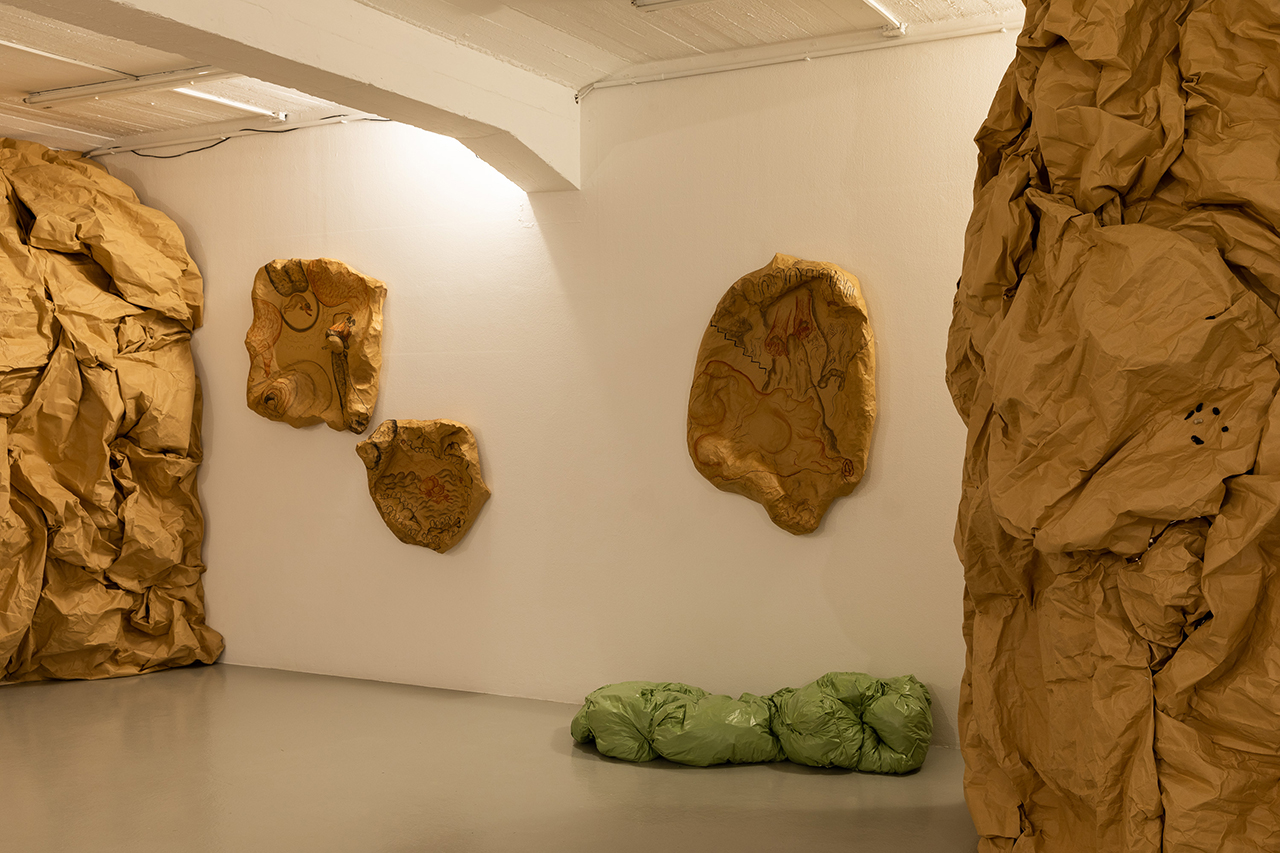 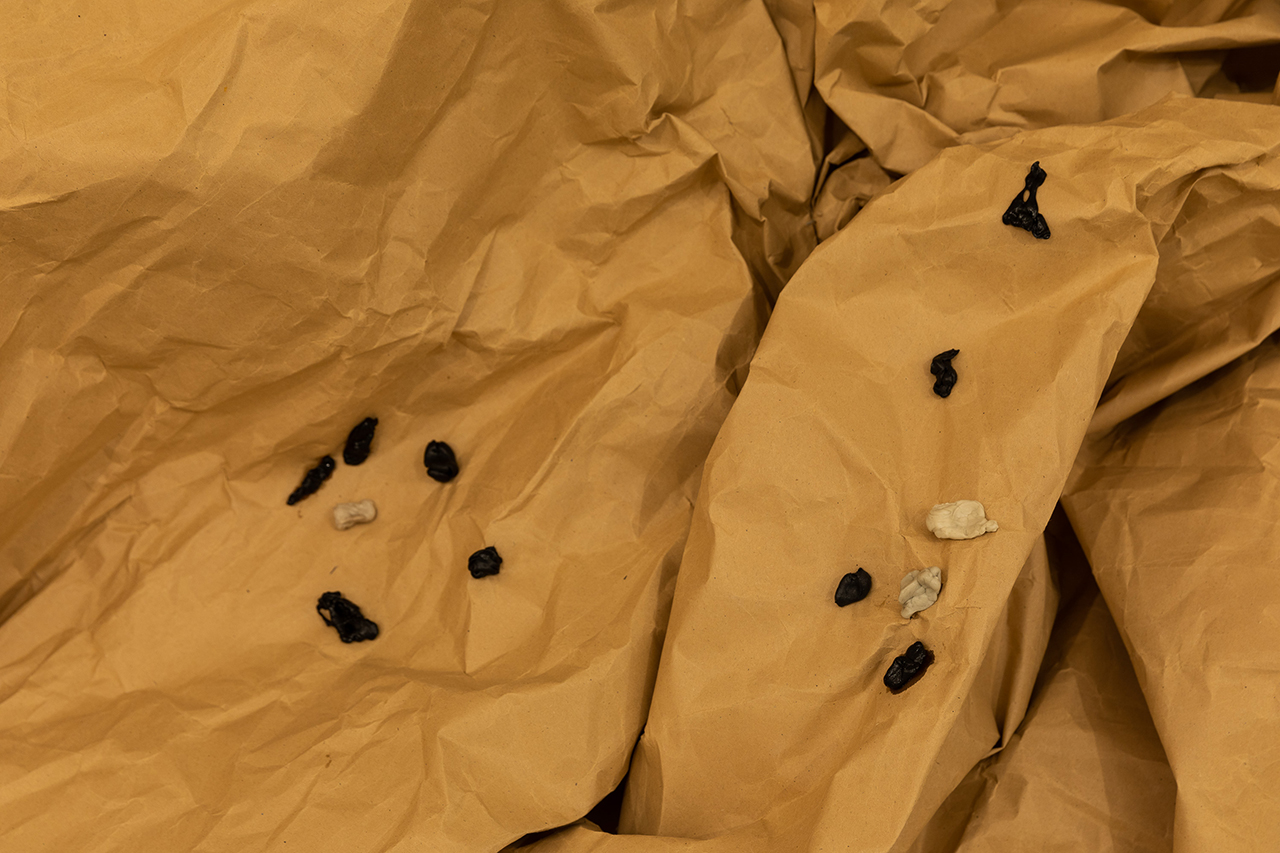 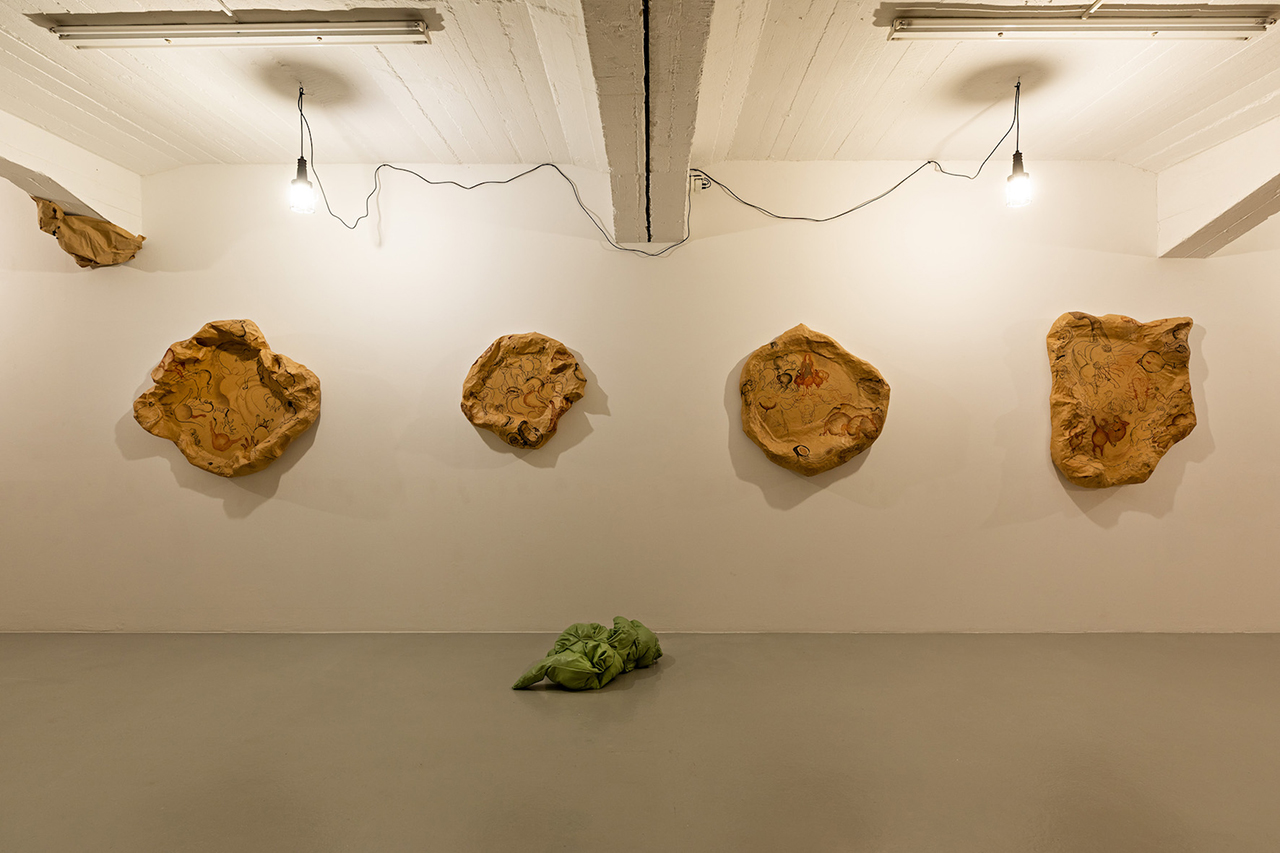 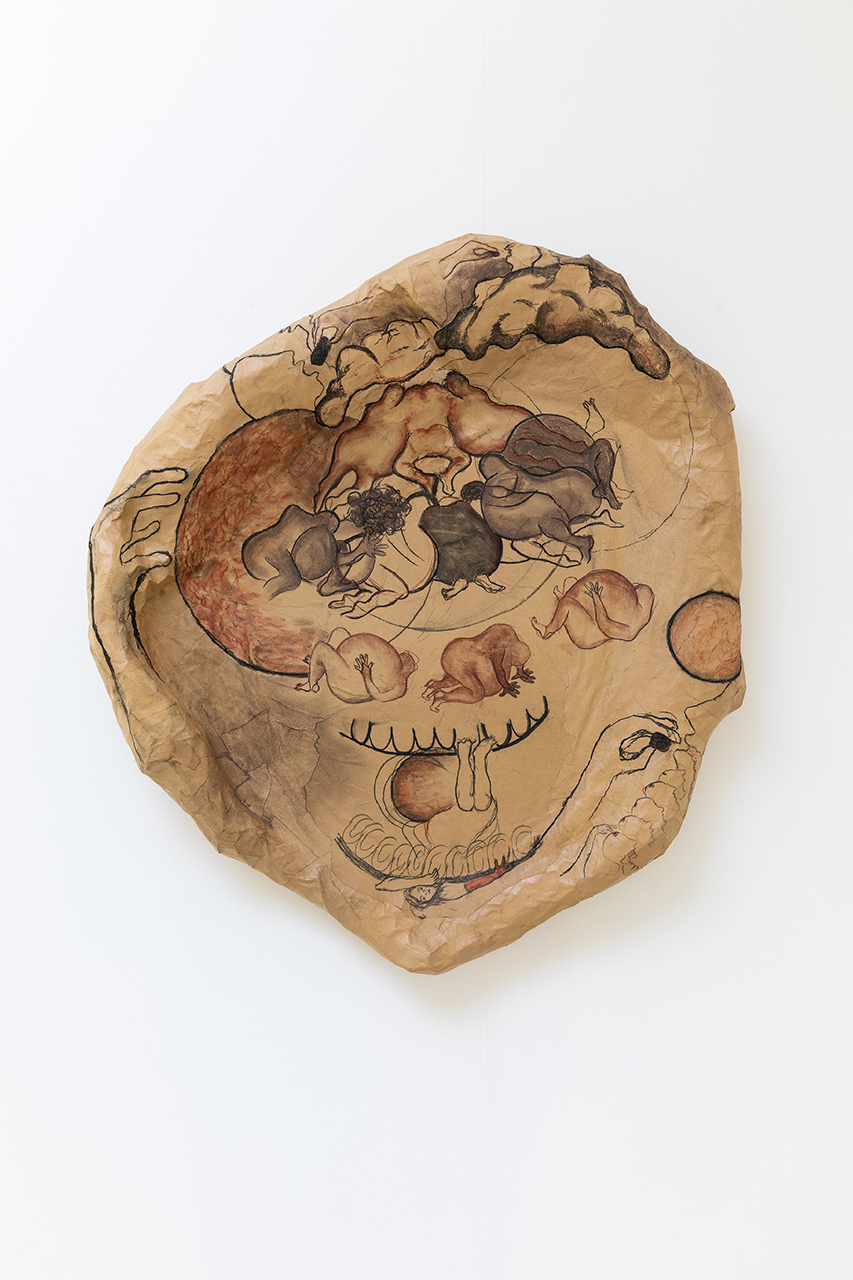 Cave Drawing, Charcoal on Paper Mache "Birthing Something Other (9)" Photo by Fred Dott